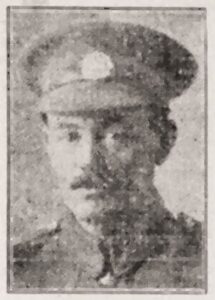 Alick Luther Baker died in hospital at Salonika in Greece of broncho pneumonia at 4 o’clock in the morning on Friday 25 October 1918 aged 35 while serving with the 9th Bn., King’s Own (Royal Lancaster) Regiment. He is buried in Mikra British Cemetery at Kalamaria – a suburb of the city of Thessaloniki.

He enlisted at St. Albans on 29 January 1916 when it was recorded that his age was 32 years and 8 months, his height 5 ft. 1 in., his weight 108 lbs., his chest fully expanded 34 ins. and his vision not perfect. He was initially assigned to the 3rd Bn., Northamptonshire Regiment, but transferred to the 3rd Bn., Royal Lancasters, on 20 October 1916 and posted to the Mediterranean Expeditionary Force on 4 November. He was finally posted to the 9th Bn. on 8 February 1917.

He was born at Lydlinch in Dorset on 20 July 1883 and was both baptised and confirmed in this church on 29 March 1903 (probably following a home visit by the rector after his arrival in the parish). His parents were John Baker of Lydlinch and his wife Eva. He married Kate Wheeler at Tonbridge in Kent on 7 August 1909. Before the war he was, like his father before him, a carpenter and lived at Brocks Cottage in Homerswood Lane. Alick and Kate had a son, Cyril Howard, who was born at Ayot St. Peter on 3 November 1911 and baptised here on 17 December. After Alick’s death his widow Kate moved back to Kent with Cyril to live at Hildenborough. On 15 October 1916 (just before he was transferred to the Royal Lancasters) he had made this short will: ‘In the event of my death I give the whole of my property and effects to my wife.’ Kate died in 1937, but Cyril lived until 1999.