Since the church was completed in 1875 the only significant addition to the interior was the wrought iron screen, which was erected in 1908.

The screen was donated by Selina Still in memory of her mother Agnes Frances Marten (née Mount) who died in 1906, and her step-father Rear Admiral Francis Marten, who died in 1891. Selina Still was the only child of Agnes’ first marriage to Rev. Henry Hughs Still.

The inscription reads along the bottom of the screen when the wrought iron gates are closed:- “To the glory of God and in loving memory of Rear Admiral Francis Marten and Agnes Frances his wife. This screen is erected by Selina A. Still. 1908”.

Selina’s parents Henry Hughs Still and Agnes Frances Mount were married on 19 January 1858 at Bath Abbey. Henry was 28 and Agnes 25. Both their fathers were in Holy Orders – Reverend Charles Milman Mount and Reverend Peter Still.

Selina’s father, Henry Hughs Still was born on 25 February 1829 and baptised at All Souls Church, Marylebone. London. He was the eldest son of Reverend Peter Still and Anne (née Hughs) and attended Eton College and Exeter College, Oxford. His father Peter Still was the rector of Cattistock, Dorset, but died on 6 May 1844 aged 42, and in September of the same year Anne also died, aged just 39. Henry followed in his father’s footsteps and was rector of Cattistock by the time of his marriage in 1858.

Selina’s mother, Agnes Frances Mount was born on 15 June 1832 and was the youngest child of Reverend Charles Milman Mount and his wife Emilia (née Nisbet). Charles Mount was rector of Helmdon, Northamptonshire for 41 years and prebendary of Wells, Somerset.

Selina Still was the only child of Henry Hughs Still and Agnes Frances (née Mount). She was born on 30 November 1858 and baptised by her father at Walcot on 21 January 1859. Sadly, her father died later that same year, on 9 October 1859.

In the 1861 census, the widowed Agnes Frances Still and Selina were living with Agnes’ unmarried older brother Charles Mount, the curate of Netherbury, Dorset. A few years later, on 18 September 1866, Agnes married Captain Francis Marten of the Royal Navy, at Scarborough. It was probably around this time that Captain Marten retired from the navy. In the 1871 census, when Francis (“Frank”), Agnes and Selina were visiting Agnes’ widowed mother Emilia in Walcot, he was described as a captain on the retired list. He was appointed a Rear Admiral in 1877.

Selina’s step-father, Francis Marten was part of the wealthy and influential Marten family who owned the Marshal’s Wick (Marshalswick) estate at Sandridge in Hertfordshire. He was born in 1814, the son of George Sulivan Marten (1763-1826) by his second wife Charlotte (née Tucker). George had a large family – seven children with his first wife Jane (née Nevinson) and four with Charlotte, although only three children from the first marriage survived into adulthood. Charlotte outlived her husband by more than 40 years. She was clearly a loving step-mother as the monument to her in St Leonard’s Church, Sandridge carries the following inscription: – “Her motherly care and affection for the children of her husband’s first marriage were the same as for her own and secured for her the devoted love of every member of a united family”.

It is quite likely that Francis and Agnes met through a family connection via the Nisbet family. Agnes’ mother Emilia had the maiden name of Nisbet, as did Clara Elizabeth, the wife of Francis’ elder half-brother Thomas Powney Marten.

By 1881, Francis, Agnes and Selina had moved to Ayot Lodge, Ayot Green, a house that still exists today. The census of that year records their large household with six servants. Ayot Lodge was the final home of Francis and Agnes. He died on 17 July 1891 aged 77 and she died on 7 August 1906 aged 74.

It was probably after her mother’s death that Selina moved to Bayford, Hertfordshire. The 1901 census shows her living in Bayford Cottage with four servants. Despite being described as a “cottage”, the property had 14 rooms. It still exists as an attractive home known as “The Round House”. Selina clearly valued her staff as she left generous bequests to her maid and coachman in her will. She must have experienced a period of poor health at the end of her life, as her place of death was recoded as 62 Ladbroke Grove, Notting Hill, which at that time was a nursing home. She died on 30 January 1912 aged 53.

The donation of the wrought iron screen suggests a great affection for Ayot St Peter church, but Francis, Agnes and Selina are all buried together in the churchyard at Sandridge. The funeral services for Francis and Agnes were conducted by the Ayot St Peter rector, Henry Jephson, whom the family would have known for many years. Henry Jephson had died by the time of Selina’s death in 1912, so her funeral was taken by the regular vicar at Sandridge.

The family grave is marked by a stone cross, close to the east wall of the church. The inscriptions around the base read as follows:-

*Although the inscription states that Francis was the third son, he was actually the seventh son, but the third to survive to adulthood. After George Sulivan Marten’s death, Marshalswick House was inherited by each of the other surviving brothers in turn and remained with the heirs of Francis’ elder brother, Thomas Powney Marten.

Marshalswick house was demolished in 1927 and the estate now forms part of St Albans. 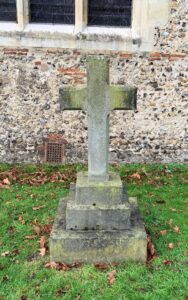