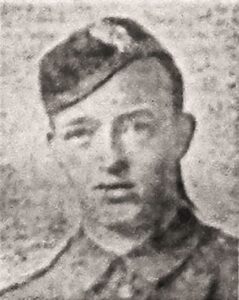 Percy James Gayler was killed in action on the Somme on Monday 25 September 1916 at the age of 21 while serving with the 14th Bn., London Regiment (London Scottish).

He was born and baptised at Hatfield in 1895. His parents were James and Clara Gayler, who were married in this church in 1894. James was a passenger guard with the Great Northern Railway and was himself born at Ayot St. Peter in 1866; he was the son of James and Emily Gayler, who were married in 1852. Among the other children of James and Emily was Fanny, who was born in 1869 and never married. On census night in 1911 Percy was a 15-year old schoolboy living with his parents and a younger brother at 15 Mount Pleasant Road, Stroud Green.

Percy is commemorated in the new churchyard on the joint grave of his mother Clara, his aunt Fanny and the latter’s niece Dolly Fever, who kept the shop at Ayot Green. Percy is buried in Delville Wood Cemetery. He is commemorated on the town memorial at Hornsey, on the memorial at the London Scottish HQ and in the roll of honour kept in the regimental memorial chapel in St. Columba’s (Church of Scotland), Pont Street, Chelsea.

Because his parents James and Clara, his aunt Fanny, his grandparents James and Emily and his great grandparents William and Hannah had close ties to the parish, the family always regretted that his name was not on the Ayot St. Peter war memorial. When it was repaired and refurbished in 2000 the opportunity was taken to add the name of lance-corporal Percy Gayler.

For more information about the Gayler family please see their family page.