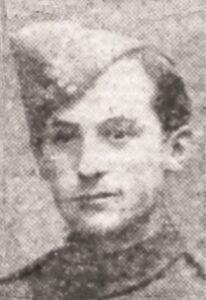 William Welsh was a chief motor mechanic with 7 Sqdn, RAF. He died on Friday 26 April 1918 aged 23 and is buried at Boulogne Eastern Cemetery in the Pas de Calais. William’s cause of death is unknown. As a motor mechanic he could have died in an accident or when his airfield was bombed or of natural causes such as influenza. In April 1918 his squadron was providing bombing and reconnaissance support to the Belgian Army.

Prior to his war service in the Royal Flying Corps (which became part of the Royal Air Force on 1 April 1918), William Welsh had for several years experimented with a home-made, single-propellered flying machine and had demonstrated its ability to fly across a field and over a barn near this church whilst carrying bales of straw as cargo.

William’s parents were John and Kate Welsh, who were married in 1894. In 1891 William’s father and his grandparents were living next to the Nelson public house in Marford Road, Wheathampstead, but by 1895 his grandfather had taken over the tenancy of Manor Farm. Thus it was that William was born at Manor Farmhouse early in 1895. He was baptised by Rev. Henry Jephson in this church on 3 March of that year.

The Welshes stayed at Manor Farm until after William’s grandfather died in 1914. Both his grandparents are buried in the old churchyard. In 1911 William (by then aged 16) had moved away from home and was boarding with a young couple at 83 Hartley Road, Luton, and working as an engineer’s apprentice in the general engineering industry. At the time of William’s death in 1918 his parents were living at Roestock (between Colney Heath and Welham Green).