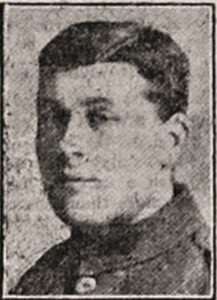 Stacey Gamgee died of wounds received in action on Monday 14 October 1918 aged 24 while serving with the 24th Bn., London Regiment. He is buried at Rue-du-Bois Cemetery at Fleurbaix in the Pas de Calais.

Stacey enlisted at Hertford but was born at Elmdon in Essex in 1894, as were his parents, grandparents and great grandparents before him. His parents were James and Mary Ann Gamgee, who were married in 1888.

In 1911 Stacey (a farm labourer aged 17) was living with his 42-year old mother Mary Ann and five siblings at Digswell Hill; his father James was not at home on census night. The cottage where they lived stood beside what was then the Great North Road and was swept away when the A1(M) was built in the early 1970s.

It is thought that Stacey might have been wounded early in 1918 and have come home before returning to the front. This is because on 9 June (possibly following a compassionate home visit from the rector) his parents took his sister Agnes Holly (who was born six years previously in Cambridgeshire) to be baptised by Rev. Henry Ryland in this church.

Stacey’s father James died on 21 March 1937 aged 71 and his mother Mary Ann died on 1 January 1937 aged 68. Both are buried in the new churchyard on the south side of the church. On their grave there is a pink granite flower vase bearing these words: ‘Pte. Stacey Gamgee Killed in Action Oct 14th 1918 Aged 24.’