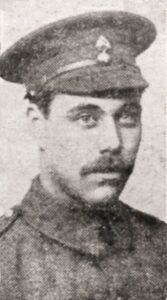 Harold William Philpott was killed in action on 15 September 1916 aged 25 while serving with the 1st/7th Bn., London Regiment. His is among the 72,195 names of men who died in the Battle of the Somme with no known grave who are commemorated on the Thiepval Memorial.

Harold was born at New Barnet in 1891. He enlisted at Sun Street, Finsbury Square, in the City of London. He was a first cousin of Randal Harwood and this family connection must explain why his name is to be found on our War Memorial. His parents were William and Louisa Philpott, who were married at New Barnet in 1890. William was born at Codicote in 1864, and his sister Sarah Alma (Randal Harwood’s mother) was born there nine years earlier.

In the 1911 census William and Louisa Philpott were living at Clifton Cottage, Victoria Road, New Barnet, together with three sons and four daughters. Harold (aged 19) was the eldest of the seven children. William worked for the Barnet gas company and Harold was employed by the Great Northern Railway. His parents were living at Clifton Cottage at the time of his death.